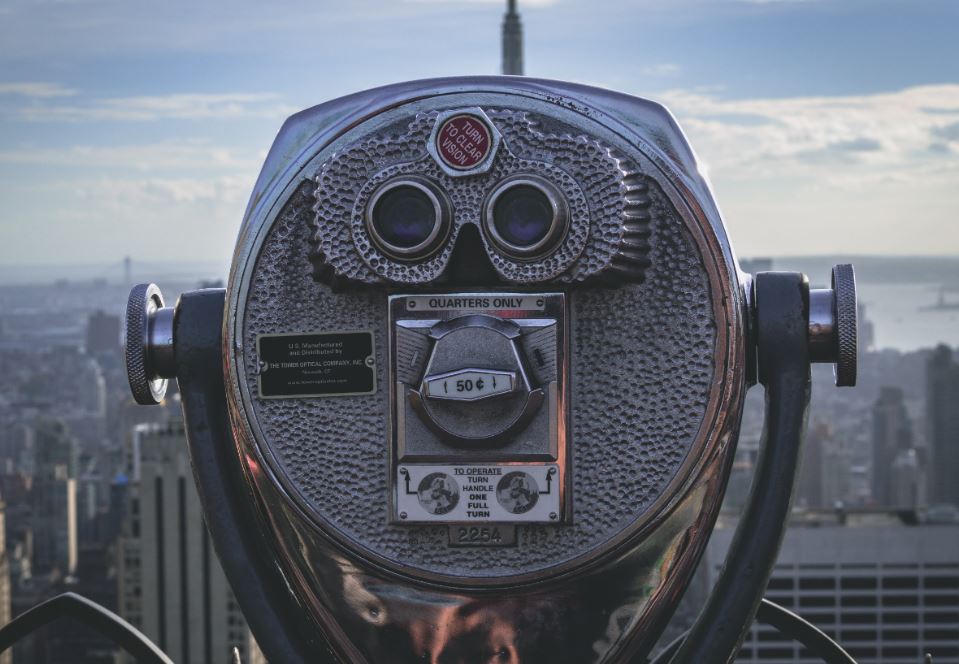 Rather like the U.K. government's approach to lockdown, the outlook for financial services jobs is a bit all over the place. On one hand, bank CEOs have been talking-up revenues, which should feed through to hiring. On the other, we're coming off the sort of peak in financial services jobs that would normally presage a terrible trough - even without a once in a century pandemic added to the mix.

New York City could be particularly vulnerable. The chart below, which JPMorgan banking analyst Kian Abouhossein included in a recent research note, illustrates the issue. - Broadly defined, employment in financial activities in NYC was on a rising trend from July 2013 through to the end of last year, a period over which 40,000 jobs were added. When New Jersey is added in and the entire New York Metro area is taken into account, the Bureau of Labor Statistics says finance employment went from 740,000 in 2013 to nearly 790,000 in 2019.

[A message from eFinancialCareers: We have a range of global finance job vacancies you can apply for here] 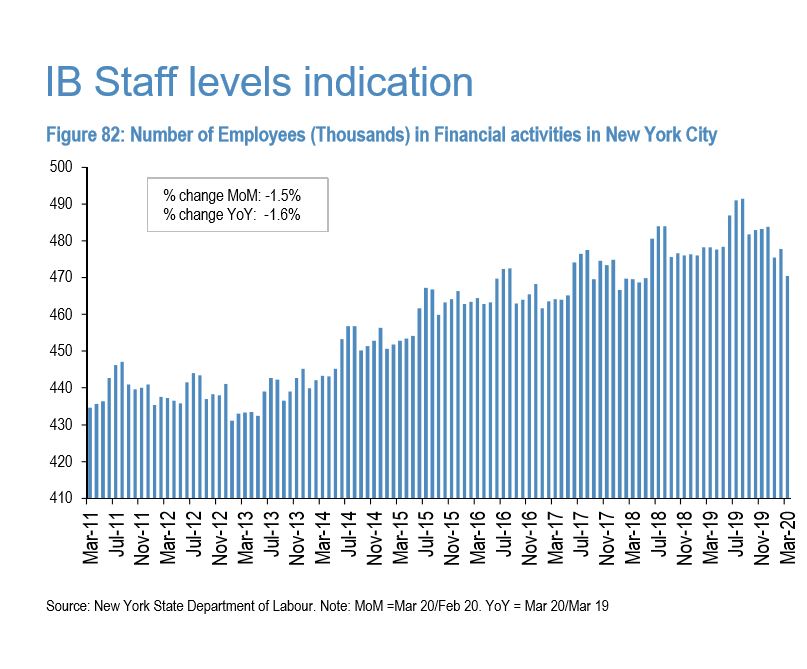 If ThinkIQ is right, therefore, New York metro area finance layoffs this year will be harsher and faster than almost everyone working in finance today has experienced.

Of course, ThinkIQ might be wrong - at least if you work in investment banking and asset management specifically.

Securities sector employment only accounts for around one third of total finance employment in NYC, and ThinkIQ's forecast is based on the total, including retail banking. In investment banks at least, there's little sign of anything much happening, yet: most investment banks guaranteed not to cut jobs during the pandemic, and Deutsche Bank aside, many are sticking with this. Despite this, the New York State Department of Labor figures indicate that nearly 36,000 jobs involving 'financial activities' already disappeared in New York in April 2020, suggesting - perhaps reassuringly - that we could be halfway through the predicted layoffs and that they're not in the wholesale banking sector after all...

If you lose your New York finance job (and by implication your finance job anywhere in the world) in 2020, the implication is that you should start looking for a new one next year. If late 2020 is a cull, 2021 could be a year of selective upgrading. Beyond that, hiring could taper off and you may find yourself compelled to do something different entirely.

Separately, Deutsche Bank is supposed to be cutting around 9,000 jobs in Germany in the next few years. Employees at its Frankfurt headquarters may find this hard to deal with due to a virus-induced lack of caffeine.

Bloomberg reports that Deutsche has reinstalled people in its Frankfurt office, with precautions to stop the disease spreading.

These precautions include the disabling of DB coffee machines, which have reportedly been turned off so that people don't touch buttons.

If you want a coffee at DB in Frankfurt, you are therefore now compelled to leaving the office and to look for one outside the building. However, this might prove unworkable given that Deutsche has also banned more than two people from using its lifts at once. If you're on anything above the 10th floor of Deutsche's Frankfurt towers, it might be simply easier to break the caffeine habit once and for all.

Manolo Falco, investment banking co-head at Citigroup: “We definitely feel that the markets are way ahead of reality. We really are telling every client to tap the market if they can because we think the pricing now couldn’t get any better. As the second quarter comes along and we start seeing the pain, and the collateral effects of that, we think this is going to be much tougher than it looks.” (Financial Times)

Houlihan Lokey is well-placed to ride out the storm. "“Be greedy when others are fearful is something we believe in. We will continue to expand.” (Bloomberg)

'A friend said her husband, who thought he was in line to replace his boss, had been appalled to learn he was in the team being led by the boss while a rival had been put in charge of the other team.' (Financial Times)

Zoom is exhausting because humans like to synchronize conversations and facial expressions and you have to work much harder to do that on video chat. (WSJ)

The nightmare of graduating during a depression. A man who graduate with honors from Yale University in 10930 struggled to get a job for four years. He was finally hired by the Post Office and was “forever grateful” and stayed there until his retirement. (Financial Times)

Inequality will increase as a result of the COVID-bailouts. "The Fed is the market, and all the big players know it, while the real economy will stagger far behind.” (RollingStone)

All the news on Smart Masks. (Rodolfor)

Alan Howard of Brevan Howard has achieved 100% returns on the fund he runs this year. (Bloomberg)

Photo by Jp Valery on Unsplash